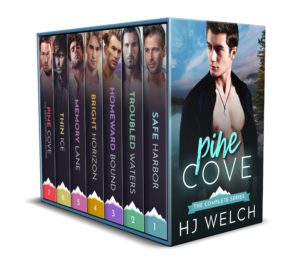 Welcome to Pine Cove, where true love lives happily ever after! This 2000 page box set contains all six novels as well as all five companion short stories.
–
Safe Harbor
Robin Coal needs a fake boyfriend for his high school reunion. He asks his housemate: a gorgeous, totally straight ex-Marine. What could go wrong? There’s only one bed, and Dair might not be so straight after all… When Robin’s past threatens their future, only Dair can save him.
–
Sweet Spot
It’s Halloween and Robin has prepared a sexy little surprise for his boyfriend Dair when he gets home from work. Hold on to your horses, Marine!
–
Troubled Waters
Bodyguard Scout Duffy doesn’t know what’s worse: the fact that his scorching one-night-stand, Emery Klein, is his bratty new client, or the fact that he doesn’t even remember Scout. But Emery’s life is in danger thanks to his out and proud charity work, and once he finally recognizes Scout, their chemistry in undeniable.
–
Homeward Bound
Swift Coal just found out he’s a father, and his daughter (and her cranky cat) are coming to stay. His best friend’s younger brother, Micha Perkins, has nowhere to go and a wrongfully tattered reputation. He’s relieved when Swift asks him to be a live-in babysitter. He just has to hide his lifelong crush. Easy, because Swift is straight—right?
–
Bright Horizon
With sixteen years between them, baker Ben Turner and lawyer Elias Solomon have no idea their crush is mutual. But when Ben inherits his long-lost family’s estate and becomes an overnight millionaire, Elias swears to protect the innocent younger man from the vultures circling him. To unravel the mystery of the inheritance, they must go to England to confront Ben’s estranged relatives…and their feelings for each other.
–
Crossed Paths
Raj Bhat is done living in the shadows. It’s time for him to take charge of his own destiny and tell the man he’s fallen for how he really feels.
–
Midnight Sky
It’s the night before New Year’s Eve. Taylan Demir is all alone, and he’s just lost his dog. Except when his handsome customer, Hudson Perkins, comes to his rescue, Taylan doesn’t just get his dog back. He’s suddenly got a hot date, and maybe someone to kiss when the clock strikes midnight.
–
Memory Lane
Angel Shields saved Jay Coal’s life in high school, and Jay has secretly loved his straight best friend ever since. Now Angel’s back in town with amnesia after a suspicious work accident and it’s Jay's turn to rescue him. He pretends to be Angel’s fiancé to see him in the hospital, but with his scrambled-up memory, Angel’s not sure it's fictional after all. He just knows he loves Jay more than ever.
–
Thin Ice
Kamran’s ex broke his heart, tricked him into aiding a bank robbery, and now he wants him to do one last job. There’s only one way to say no: seek the protective custody of the biggest, grumpiest FBI agent ever, Lee Marshall. And pretend to be his boyfriend for a week-long family reunion in their giant mansion. Wait, what?
–
Calm Shores
Gorgeous, sophisticated Dante walks into Oliver’s bar and orders…a boyfriend?! Dante needs a man to keep his mother from setting him back up with his awful, cheating ex, and Oliver is up for the challenge.
–
Fresh Snow
Emery Klein is throwing the best Christmas party ever, but his fiancé, Scout Duffy, and all their friends have something more exciting in mind.
–
Each Pine Cove book can be read as a stand alone and has its own happy ever after. But if you read the whole series, you’ll see a lot of familiar faces!